Visionary From The Stars 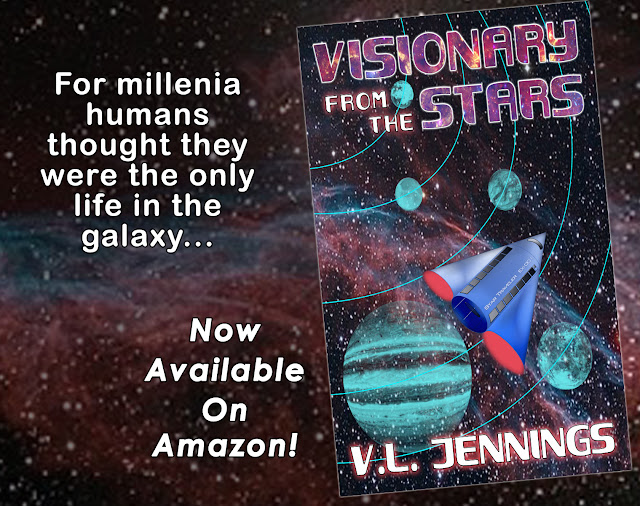 For millenia, humans thought they were the only life in the galaxy--
until the day an alien species claiming to have humanity's best interests in mind forces its way onto an unsuspecting exploration craft.

In another part of space, the Star Traveler's crew sets out on a camping trip to the surface of the moon. There, they stumble upon an object covered in alien writing revealing the first piece of a galactic map that will lead them into an intergalactic controversy--all while the Platonian race strives to sabotage their every move.

Reviews For Visionary From The Stars

Don't want to review on Amazon? Leave your own review for Visionary From The Stars in the comments below!
Author/Reviewer Geri AhearnTop Contributor: Cooking
5.0 out of 5 stars Cleverly Entertaining!
Reviewed in the United States on October 20, 2008
In her second science fiction novel, Virginia Lori Jennings takes thereader through another incredible galactic journey as the Platoniansplan to sabotage the Star Traveler's crew, and a lone scientist isfaced with intergalactic controversy. Can Jean McClain save humanity?Is the Galactic Bible ever found? Will the ancient quest continue itssaga into the land of the unknown? What happens in the mission fromGanymede to Exandra? I recommend this book to teens, young adults,and all science fiction lovers. "Missionary From The Stars" is action-packed, and is as mysterious as "The Alien Mind." The clever authormanages to fill the pages with breathtaking black magic, whileentertaining the reader with the ultimate alien encounter as good asSteven Spielberg's Masterpiece, "E.T."Geraldine Ahearn, A.I.O.M.Author of 6 books
3 people found this helpful
Helpful
Report abuse  Permalink
Pamela
5.0 out of 5 stars Ignite Your Imagination!!
Reviewed in the United States on August 4, 2012
Virginia Lori Jennings has done an excellent job in filling your mind with familiar and new planets, alien beings, and an impressive cast of characters! Visionary From the Stars is superbly written, and the storyline never falls short, as your imagination is ignited with pictures of each mission and journey. This is a Sci-Fi book for all generations, young and old alike.(Pamela S. Valerio -Author of "A Walk Toward Jesus)
4 people found this helpful
Helpful
Report abuse  Permalink
James Henry
5.0 out of 5 stars Visionary from the Stars a Keeper
Reviewed in the United States on August 4, 2012
I love finding up-and-coming sci/fi writers who have a good command of the English language, and tell a compelling story at the same time. Virginia Lori Jennings accomplishes this and more in this tale about a lone scientist who holds the fate of humanity in her hands. Although the target audience is a young crowd, the story captivated me enough to keep my interest, despite being much older than most of her readers. I strongly recommend this book for your sci/fi reading pleasure.
3 people found this helpful
Helpful
Report abuse  Permalink
Bruce Barbre
5.0 out of 5 stars Definitely a great story for young readers
Reviewed in the United States on August 2, 2012
As the author of the Dragon Keepers series which is also for young readers, I can say without a doubt that Visionary from the Stars is a great story for young readers. I see this book originally was released in 2007 and I know how hard it is for unknown authors to get noticed. I for one am going to share this with my grand kids and recommend it to my friends for their kids and grand kids too.
3 people found this helpful
Helpful
Report abuse  Permalink
V. Kimball
5.0 out of 5 stars This is the science fiction that piques readers' curiousities of the "what ifs"!
Reviewed in the United States on August 8, 2012
Virginia Lori Jennings imagination for science fiction is evident in this quick paced, adventure driven story. Aliens, life forms, galatical maps, Oh my! She has it all. The first chapter had me hooked with the mysterious who done it twist in the story line. A page turner filled with adventure, mystery, and thills. Young readers will devour this one!
3 people found this helpful
Helpful
Report abuse  Permalink

Dean Bonner
5.0 out of 5 stars Excellent Character Development and Dialogue
Reviewed in the United States on September 1, 2012
This was a riveting read, because Virginia's skilled use of dialogue brought the characters to life and gave them depth.
One person found this helpful
Helpful
Report abuse  Permalink