Caption This - A Game!

Today on my blog- JUST for the fun of it, I am going to try a caption this game! You are all welcome to join in the fun!

While you are pondering your caption entry, I have an excerpt from Visionary From The Stars to share with you! In this one, the main characters find themselves in a very serious, and yet slightly funny situation. Enjoy! (and DON'T forget to post your caption in the comments!) 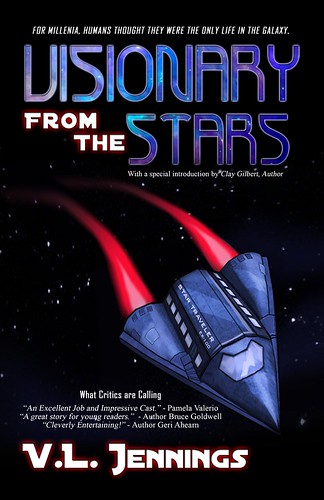 Later, in the afternoon, the team passed over one of the many grassy hills and could see, further ahead, the edge of what appeared to be marshlands. It was quiet--too quiet-- almost as if something were waiting for them there; expecting them as they approached. As the group slowly began to follow the edge of the marshlands, Laurie started to feel quite uneasy. Young Chris Hagan looked over his shoulder and into the marshland trees repeatedly, soon finding himself becoming increasingly worried about…well he didn’t quite know.

As if out of nowhere, a downpour of stones and arrows came launching out of the trees and rained down upon the unprotected EOE team. The group barely had time to cover their heads with their arms when a large band of squirrels jumped out of the trees yelling war cries, and surrounded the team. Realizing that the group had no weapons ready, the squirrels took the team hostage.

As the squirrels herded the EOE Team into the marshlands, a rather burly squirrel handcuffed and chained the team together. Mr. Kingston looked around for his daughter and Chris— they were nowhere to be seen.

“Captain Mitchell, the children aren't here!” He whispered urgently. “Do you think they escaped?”

“They could get lost out oomf!” Mr. Kingston managed before being butted in the ribs with a stick by a fierce looking squirrel.

About The Book:
For millenia, humans thought they were the only life in the galaxy-- until the day an alien species claiming to have humanity's best interests in mind forces its way onto an unsuspecting exploration craft. In another part of space, the Star Traveler's crew sets out on a camping trip to the surface of the moon. There, they stumble upon an object covered in alien writing revealing the first piece of a galactic map that will lead them into an intergalactic controversy--all while the Platonian race strives to sabotage their every move.

Email ThisBlogThis!Share to TwitterShare to FacebookShare to Pinterest
Labels: Book Tour, science fiction, Speculating Among The Stars, V.L. Jennings, Visionary From The Stars