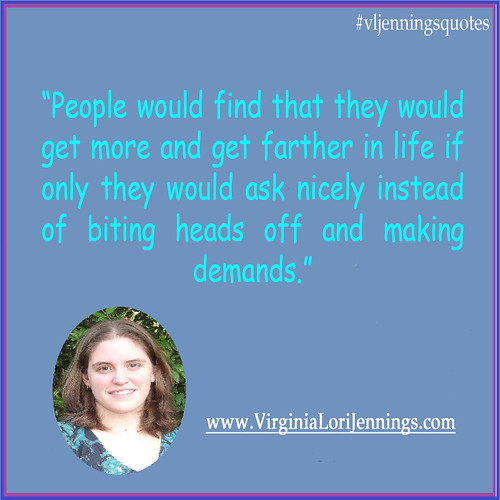 I'm just gonna leave this here. Something that I have been seeing examples of a lot lately, in real life and in the series my family is re-watching (Smallville). Someone wants something and they jump to conclusions and get all nasty about things before even stopping to consider what the outcome might have been if they had asked politely and nicely.

Not everyone is like Lex Luther from Smallville, deviously planning things behind the scenes and leaving Clark to always blame him first. Well, because lets face it, it normally IS Lex's fault.

Would their relationship have been any different had Clark tried to connect and hang out more with Lex in the beginning? Eh, maybe not- because it is Superman's story after all and somethings just can't change without messing up the whole series.

And then we have major disasters like what happened to our neighbor last year. Something broke her waterline right at the shut off in front of her house. No one was home and we didn't notice it till the middle of the night when I ran outside to scare away some dogs that were ganging up on another dog.

I ended up ankle deep in water in the middle of this lady's yard, waving and yelling like a lunatic. Yeah, I'm nuts... I know. Anyhow, the dogs ran off and I realized that gallons upon gallons of water were gushing out all over the place.

Now, I don't know how this lady reacted but I do know how some might have. Calling up and fussing out your water company because the water bill is high and it wasn't your fault may not be the right thing to do. Fast forward to this recent cold snap and I found out something really nice about the water company!

Our pipes were run in our attic, during the last cold snap they froze and created an epic gargantuan disastrous mess. Water damage company and insurance company was called, yeah... after we panicked a tiny bit first of course. THEN we received the water bill. Oh my gosh was it high (hundreds of dollars).

So I called the water company up and explained to them what happened and that we just don't have the funds to pay all this up front and was there perhaps a way to set up a payment plan. The lady told me not to worry about it, just send them an invoice of what repairs were done and what the damage cost and they would deduct the water overage off of our bill.

Color me shocked and relieved!

But lets rewind to the very angry water patron from earlier (imaginary of course). Had our irate customer simply explained to the water company that there was damage done (and it wasn't that they were filling up swimming pools) then the water company would have been able to answer politely in return. Everything would have been fine, and our irate customer needn't have embarrassed themselves.

So- lesson from all this? Be calm, ask nicely, and try to put yourself in the other person's shoes.