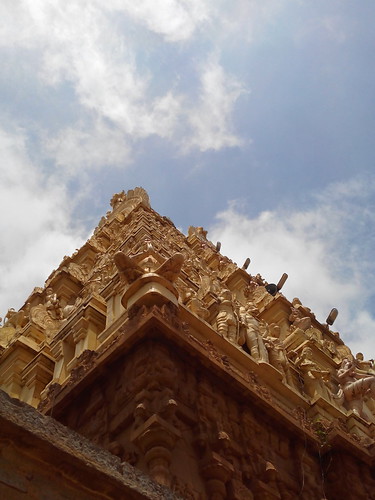 Henry craned his neck to stare out the window as Fred landed their ship on Unaris, the 2nd planet in orbit around a set of binary stars. Gloria had been here once before so instead of peering out the window with her crewmates she sat going over the scans of the ruins below.

Henry threw off his harness and patted Gloria’s shoulder he passed her on his way to the airlock.

“Well, if we are going to get this planet ready in time then we better get moving,” Henry said with a shrug.

Gloria sighed. ‘I am not looking forward to this.’

Due to the lighter gravity the three of them hopped lightly over the dry grassy field towards the ruins. Unaris had oxygen so they didn’t need their suits, but the air was dry and stale. Fred stopped a moment to take a drink from his water bottle.

“You might want to conserve as much of that as you can,” Gloria said, pausing to watch him take in another big gulp of water. “The rain system could be on the other side of the planet, by the looks of things it hasn’t rained here in a while.”

“Isn’t that your job, Whisker? To get the rain to come back?” Fred said with a chuckle.

Gloria narrowed her eyes at him and sighed. “It’s not that simple,”

“What does the machine feel like when it turns on Gloria?” Henry asked curiously as they walked up the dusty metallic steps into a giant metal tower.

Whoever had lived here had long since moved on. Buildings farther down from the tower were either caved in or over grown by thick dead plants.

Gloria gulped, she really didn’t want to think about how it felt.

“It’s a little creepy, the machine transmits impressions from the designers. It helps you feel what the planet needs and where it needs it.” Gloria answered.

At the top of the tower a giant machine stood in a roofless room. The machine held huge metal prongs pointed high into the sky above them. Taking a deep breath Gloria climbed into the odd control chair. At her touch the machine lit up, recognizing a living being’s electrical impulses again after so many years. A metal band lowered around her forehead and after one last thumbs up to Henry and Fred she closed her eyes.

Gloria waved her mental hand over her spot on the globe floating in her mind. Vibrations shook the machine gently as the metal prongs came to life, stirring the air into motion.


This post was part of the 52 week flash fiction challenge on facebook (somehow I never hit publish here on my blog so it is a bit late.)
Week 9 word prompt: Whisker
Word Limit: 20- 500
This one tops out right at 500 words.