“When are your cousins coming over for the Easter egg hunt?” Jimmy asked.

“They should be here in an hour or so.” Henry answered.

“Sure do!” Jimmy patted his backpack.

The two teens entered the cargo bay through a set of sliding doors. Henry looked at all the metal cargo containers and shelves of supplies strewn throughout the room.

“The captain said that this would be the best place to set up the egg hunt,” Henry explained.

“He was right, this is a perfect spot!” Jimmy said, setting his backpack on one of the containers and pulling out two paper bags full of eggs.

“Hand me one of those bags of eggs.” Jimmy tossed one of the paper bags to Henry.

“Relax! They are hard boiled.”

Henry opened his bag and pulled out one of the eggs.

“Did you have these dyed?” Henry asked.

“Um no... was I supposed to?” Jimmy asked, preoccupied with hiding his own set of eggs on the other side of the cargo bay.

“I guess they’re ok. Where did you get these from?” Henry pondered the third speckled egg before he placed it behind a cargo container.

Jimmy eyed the white hard boiled egg in his hand, “Um... the galley, where else?”

“Yup me too!” Jimmy said jumping up from behind the farthest container and followed Henry out of the cargo bay.


The two teens returned an hour later with three of Henry’s youngest cousins, multi colored baskets swinging in their hands.

The three kids rushed into the cargo bay and ran off in all directions. Little shouts of joy and excitement could be heard as one by one the kids found the eggs. When they could find no more they ran back to Henry and Jason to have them counted.

“Looks like there are still more out there guys,” Henry said eyeballing the baskets and their all white eggs.

The three kids looked at each other in excitement before running off to find the eggs again.

After a few minutes the excitement turned into confusion.

“There isn’t any more, we looked!” The older of the three kids insisted.

Determined to show the kids that they weren't looking hard enough, Henry walked over to a spot he knew he had hid one of his speckled eggs in.

The egg was gone.

“OOOh! Eggie!” The youngest of his cousins squealed.

“Did you find one?” Jason asked.

“Um, no. It rolled that way.” The older of the three kids pointed.

Confused, Henry headed in the direction that the egg had rolled, hoping to find it.

What he found instead where a dozen creatures clawing through their speckled shells! He ducked as the creatures spat acid at him and narrowly missed him.

(This post is inspired by my three year old who, after we dyed the Easter Eggs, decided to ask me where the babies were. -pointing to the Easter Eggs- I was struck with the sudden realization that he knows that some babies come from eggs, and we were about to eat these eggs tomorrow! Oh the HORROR!) 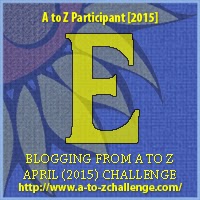 Today's post was inspired by the letter E. E is for: Eggs  as part of the Blogging from A to Z April 2015 challenge! Click on the letter to join on in the fun!
Every day (excluding sundays) I will be writing a post about something that begins with the letter for that day. Most of the time you will find a sci-fi flash fiction piece here.
For Readers: Do you like eating Easter eggs? Do you eat both the white and yellow part?

As always... if you have something that starts with the letter F that you would like me to try to incorporate into tomorrow's short story, I'm always open to suggestions!